Hands Across The Sand offers people a way to link together in their determination to stop the contamination of our waters.  Every year they post pictures of actions across the globe where people line up and hold hands in front of a beloved body of water.  This year, there were nearly 100 events in 6 different countries.  For the past two years, the Rock County chapter of the Wisconsin Safe Energy Alliance (WiSE Alliance) has held an event on the banks of the Rock River. The day kicked-off meeting people at the Farmer’s Market before the event in the afternoon. 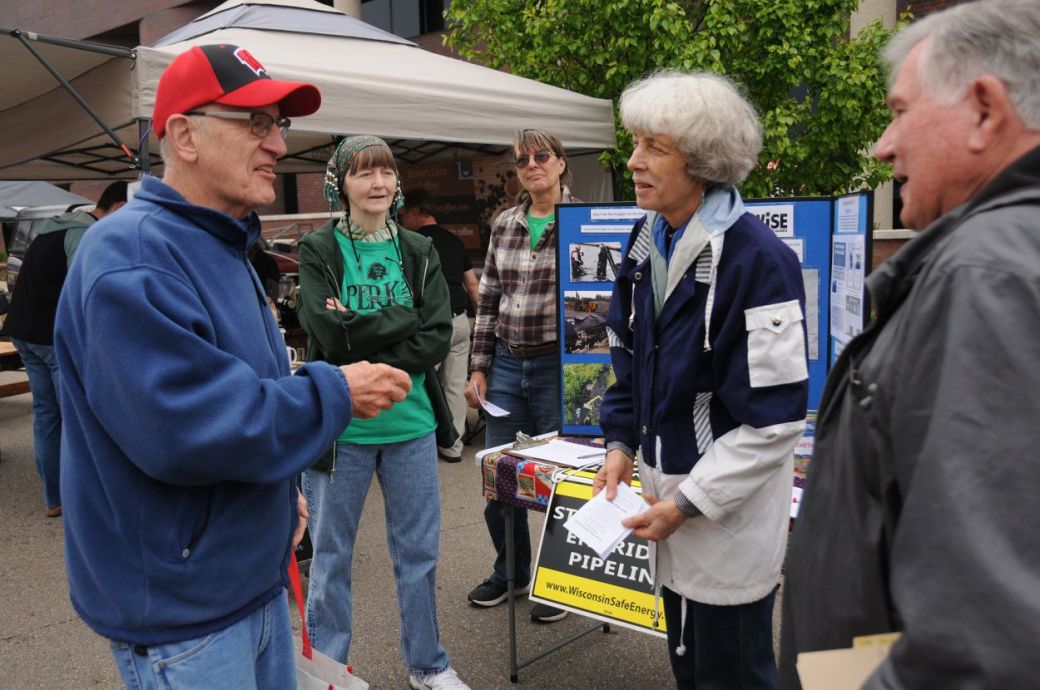 The WiSE Alliance crew made scores of new contacts at the Janesville Farmers Market before the event.

Aaron Aegerter, the main speakers and emcee, was born in Janesville, WI, and spent his childhood summer days fishing, catching crayfish in a can, and swimming in the Rock River.  Now he’s concerned about a grave threat to that river, and he’s speaking out.

On Saturday, May 18, Aegerter spoke to a couple dozen people who gathered midday in Firehouse Park in downtown Janesville to call attention to the danger posed by a planned tar sands pipeline that Enbridge wants to route through Wisconsin and Illinois.  He read his guest editorial that was published in the Janesville Gazette before last year’s Hands Across the Sand event. Here are some highlights from it.

Janesville’s Arise Plan and the Arise Now group are investing over $42 million in public and private money to revitalize Janesville’s downtown and riverfront. The car park has been removed, Town Square Park is nearly done, and this year Festival Street will take form, creating huge opportunities for cultural events, fun, jobs and profits.

But who would come if the Rock River were filled with tar sands oil? Think it can’t happen? Ask the folks along Michigan’s Kalamazoo River, which was fouled by the largest inland oil spill in U.S. history in 2010, when an Enbridge pipeline burst. Tar sands, mixed with toxic chemicals like benzene and hydrogen sulfide, gushed out of a huge gash in the pipe for 17 hours before Enbridge turned it off. The immediate aftermath was horrible; the cleanup took years….

Who would use the new Outdoor Amphitheater, Fitness Court, Pedestrian Bridge, Water Feature or Riverwalk, if they afforded a view of a blasted, lifeless river with a strong petroleum odor?

Janesville needs to say no to this dangerous pipeline. Across our country, the mood is turning against extreme fossil fuel projects like tar sands and fracking. Pipelines are being delayed and canceled as companies see the public and their investors rejecting these dangerous energy sources and embracing renewables.” 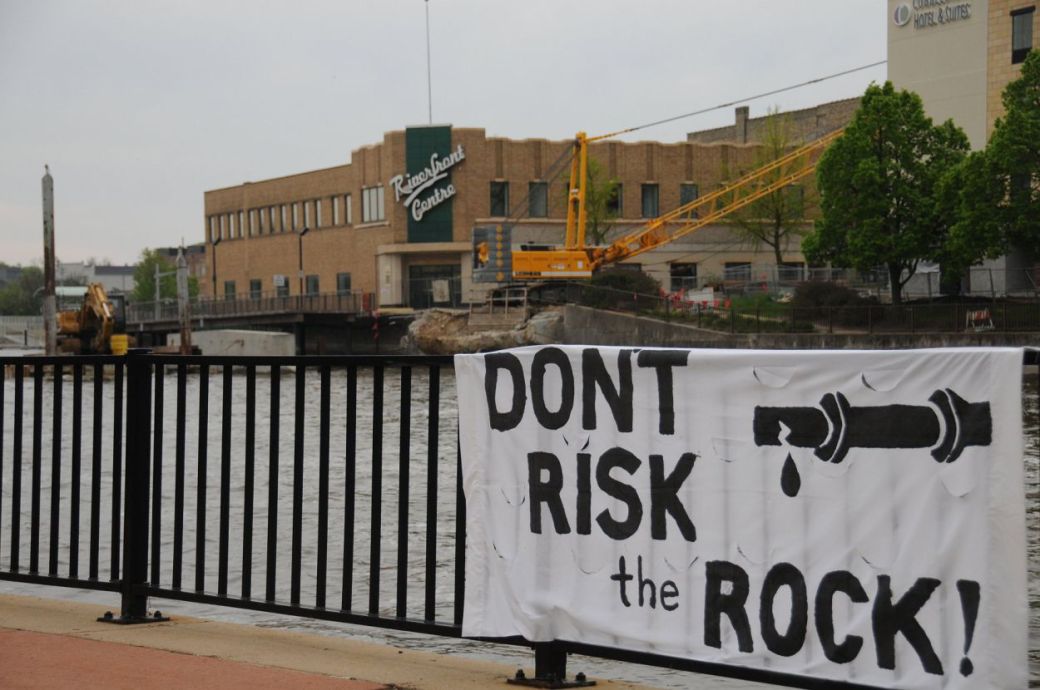 This photo shows the risk to riverside businesses posed by a new tar sands pipeline that would cross the Rock River.

Rock County Supervisor Wes Davis also spoke about his resolution that the Rock County Board will vote on this Thursday, May 23. The resolution (Page 63 of this document) calls on the WI Legislature to establish a commission to look at the use of eminent domain around the state.  Enbridge worked behind the scenes with the WI State Legislature in 2015 to change the eminent domain laws to make sure they would be eligible to use them, so this is directly related to pipelines.   Please attend if you can.  We’ll have stickers there to identify you as a supporter of the resolution.  Public attendance makes a huge difference in the outcome of County Board votes!

After his talk, Aaron gave a stirring rendition of his original rock anthem “Don’t Risk the Rock,” with help from the crowd.  We are now working to make a studio recording of this great song!

After lining up along the river, the day ended with participants walking in a circle as Mark Welch drummed and sang an Ojibwe song about the need to honor and protect both water and women.

Thanks to everyone who attended this event or others around the state, country, and globe!