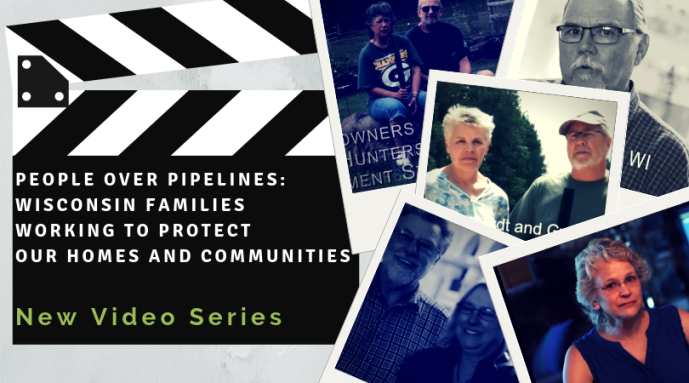 Enbridge Energy has a pipeline network that brings tar sands oil from Canada south to the Gulf, likely for export. Wisconsin currently has four Enbridge pipelines that travel from Superior south, through the state into Illinois. There is also a series of pipelines that bring oil into Superior and the infamous Line 5 Pipeline, which travels across northern Wisconsin into the Upper Peninsula.

Enbridge has now proposed a new segment of the Line 5 pipeline in Wisconsin and they are now laying the groundwork for another pipeline throughout Wisconsin.  This ‘twin’ line will carry even more tar sands oil south to refineries, where it will likely be exported to the world market.  Transporting these toxic, flammable substances leaves Wisconsin’s families, property owners, and taxpayers to bear all the risks, with little or no reward.

Across Wisconsin, concerned community members, landowners, and environmentalists have come together to form the Wisconsin Safe Energy (WiSE) Alliance to call for safe energy developments that don’t threaten property rights, safety, and our water. The WiSE Alliance was formed after Enbridge announced that it would be expanding its Line 61 pipeline making it the world’s largest tar sands pipeline, outside of Russia.

This ‘twin’ pipeline could give Wisconsin the two largest tar sands pipelines in the world, outside of Russia. Twinning the pipeline means twinning the safety concerns, twinning the risks to Wisconsin’s rivers and lakes, and twinning the hazards to our tourism economy.

An additional blow to Wisconsin landowners is that after a late-night budget amendment expanded eminent domain authority, Enbridge could now gain the ability to use eminent domain to get the land necessary for this new pipeline. This leaves the door open for Enbridge, a foreign company, to take a Wisconsinite’s land for their private gain.

Now, landowners who are threatened are sharing their stories. Read more and take action here