Tar sands (also referred to as “oil sands” or “heavy crude”) is made up of a thick petroleum sludge called bitumen, mixed with clay, water, and sand. This mixture is scraped or steamed out of vast deposits in Alberta, Canada, leaving behind a sprawling, toxic wasteland where boreal forests once stood.

Tar sands can be open-pit or strip mined and refined into oil. The Wisconsin Petroleum Council estimates that 80% of our gasoline comes from tar sands oil. Producing a barrel of tar sands oil is a more expensive and destructive process than drilling for conventional crude oil, and the process generates 22% more carbon dioxide emissions than conventional oil.

Because bitumen is so thick, it must be diluted with thin natural gas condensates- including the carcinogen benzene– before it will flow through a pipe. This mix of bitumen oil and chemical diluent is referred to “diluted bitumen” or dilbit for short.

Because tar sands oil is different from ‘traditional’ oil, tar sands oil reacts differently when spilled.  Unfortunately, the Kalamazoo Spill in 2010 was the guinea pig to discover this. 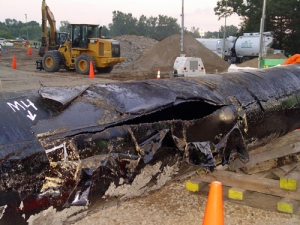 In 2010, an Enbridge pipeline ruptured and spilled over one million gallons of tar sands oil into a wetland that leaked into the Kalamazoo River.  Heavy rains caused the oil to travel 35 miles downstream. The National Transportation Safety Board stated: “for more than 17 hours they failed to follow their own shutdown procedures.”

Given the length of time before clean-up started, the diluents mixed with the oil vaporized and the tar sands oil sunk to the bottom of the River.  Unlike traditional oil that can be cleaned-up by using a boom, we don’t know how to clean-up tar sands oil that sticks to the bottom of the river.  The environmental damage to the wetlands, Kalamazoo River, and Talmadge Creek continues and will likely never fully be erased.  Clean-up has already exceeded $1.2 billion after dredging of the river went on for years to try to clean it up.

Clean-up of the Kalamazoo Spill. Picture from NOAA

Last year, the National Academy of Sciences completed a study that confirmed this. The study found that standard techniques of clean-up are not effective, there are no reliably effective ways to clean up tar sands oil at present, and it cannot be guaranteed that such methods will be developed. The study found that spills were also estimated to cost 14.5 times the clean-up cost for conventional crude oil.

Line 61 passes underneath some of Wisconsin’s most important waterways: the St. Croix headwaters (in three places–the Namekagon, Totogatic, and Eau Claire), the Wisconsin River (just north of Petenwell Lake), and the Rock River (north of Lake Koshkonong).  With the full impacts and clean-up unknown, this risk of adding another pipeline under these rivers is too great.