The Risk of A Spill

A recent National Academy of Sciences study confirmed that tar sands spills are much more difficult to clean up than ordinary crude oil spills. Because tar sands are more dense,  the bitumen they contain ends up sinking, and then settling into the sediment at the bottom of waterways. The traditional methods of skimming oil off of the top of water bodies after spills does not effectively clean up tar sands oil. Instead, bodies of water which experience a tar sands spill need to be dredged.  This expensive process can cause permanent damage to drinking water supplies, and the lasting impact of spills can damage ecosystem health and decrease property value.

Unfortunately, the sinking bitumen isn’t the only problem. The chemicals that are mixed with the tar sands in order to help it move through pipelines include various carcinogens, including benzene, hydrogen sulfide gas, and toluene. When a pipeline ruptures, these gasses enter the air, and can significantly endanger the health of those living nearby. 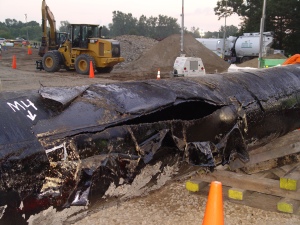 Section of the pipe from the Kalamazoo spill Photo Credit: National Transportation Safety Board

Between 1999 and 2010, there were over 800 spills from Enbridge pipelines, together releasing more than 6.8 million gallons of oil. Enbridge has been responsible for several significant spills in Wisconsin. In 2007, an Enbridge pipeline running through the heart of the state released more than 50,000 gallons of oil in Adams County, contaminating 17,000 tons of soil. Later that year, the same line ruptured again, spilling an additional 201,000 gallons of crude oil.

Enbridge is also responsible for most expensive inland oil spill in U.S. history. In July 2010, Enbridge’s Line 6B spilled approximately  one million gallons of tar sands oil into Talmadge Creek, which then flowed to Michigan’s Kalamazoo River. Because Enbridge failed to follow their own shutdown procedures, the spill continued for over 17 hours. The oil traveled 35 miles downstream, causing massive damage to the river, and impacting multiple industries in the area, including fishing and tourism. After a clean up process costing over $1.2 billion and requiring over 5 years, Enbridge has claimed that the clean up process has been completed. The EPA, however, says that a significant portion of the oil may never be fully removed from the Kalamazoo River.

One sobering fact to remember: The amount of oil that leaked from Line 6B into the Kalamazoo over 17 hours could gush from Enbridge’s massive Line 61 in less than 30 minutes. Our beloved St.Croix, Namekagon, Wisconsin and Rock rivers are all crossed by Line 61. Are we next?